I am getting married. What do I need to do?

Contact Father at least six months before your wedding. Couples are required to take an “Enrichment Program of the Engaged.” Both parties will need certificates of Baptism and Confirmation. View Marriage Planning and Preparation Guidelines.

How do I arrange for my child’s baptism?

Contact the parish office at (920) 892-4006 to schedule a baptism. Baptisms are celebrated during Mass. Couples attend a 1 1/2-hour Baptism Preparation Class which includes a light dinner and socializing.

How do I arrange for a funeral?

Father will meet with you and the funeral director of your choice. Together you will plan the funeral. Contact Father at (920) 892-4006.

How do I join St. John the Baptist?

We welcome you and look forward to the opportunity to meet you and register you as a member of our parish family. Please complete the confidential parish registration form and return it to the parish office.

Are there “membership” dues?

At St. John the Baptist we consider ourselves as being a part of a parish family. As a member of a family, we know our obligation to contribute to its upkeep. Each member decides with his/her God what is their appropriate response for His Blessings in their lives.

How do I become Catholic?

The Church has established the RCIA (Rite of Christian Initiation for Adults) for those who have been called to become a Catholic. Contact the parish office at (920) 892-4006 for more information.

What types of clubs/groups do you have?

A wide variety of programs are available, including: sports activities, service, charity, education and ministry oriented programs. Please call the parish office at (920) 892-4006 to inquire about your particular area of interest.

Do you offer daily Mass?

Weekday Mass is offered Monday/Tuesday/Thursday mornings at 8:00 am. View the bulletin for our full Mass schedule. We look forward to having you join in the celebration.

When is the Sacrament of Reconciliation celebrated?

The Sacrament of Reconciliation is offered the second and fourth Saturdays of the month from 9:30-11:00 am. Father is also available for private confessions by appointment. Call our parish office at (920) 892-4006 to schedule a private confession.

How do I have a Mass offered for a loved one?

Contact the parish office at (920) 892-4006 to schedule a Mass intention. In the Archdiocese of Milwaukee, the customary stipend offering is $10.

What are the directions to the school?

What are school hours and dismissal times?

School begins at 7:35 am. Dismissal is at 2:35 pm. Safety of the children after school is the parent/caregivers responsibility and students are expected to leave for home with their parent/caregiver immediately following dismissal. For the safety of our students, children whose parent/caregiver are not on the playground with them when the final bell rings (approximately 7 minutes after the dismissal bell) will be expected to come into the school building and wait to be picked up inside the building.

How many students are enrolled at SJB?

There are 130 students enrolled at St. John the Baptist for the 2020 - 2021 school year with classes from 3 and 4-year-old Early Childhood through 8th Grade.

What is your dress code?

St. John the Baptist School takes pride in its long tradition of excellence. The attire of our students reflects both personal and school pride and fosters an environment that is appropriate for an academic environment. Student clothing should always be neat, clean, and free of tears, frays, or holes and should fit well. Parents/Guardians are the best judges of the appropriateness of clothing and should monitor clothing daily. The school principal will make the final determination on the appropriateness of clothing and will approve or disapprove any item not addressed in the dress code. The dress code is outlined in our SJB Parent Handbook.

How do I find out about school closings and emergencies?

How do I find out about in-service days and vacations?

Visit our calendar for the most up-to-date information on in-service days and vacations.

What if my child becomes ill at school?

In case of an illness or an injury, the child will be cared for temporarily in the Health Room by a volunteer or staff member. Parents will be contacted to come and pick up the child. An updated emergency card must be on file in the school office. If a parent is unreachable and hospitalization is required, school officials will take needed action based on the authority of the parent signature/authorization on the student’s emergency card.

What if my child will be absent from school?

If your child is ill, please contact the school office (920)893-5961 prior to 9:30 am. When returning to school after an illness, a note must be brought from home, signed by the parent/guardian, stating the reason for the absence.

Are parents allowed to visit?

Yes, parents are welcome to visit the school. Please sign in at the office upon entering the school. We do ask that you do not interrupt the teaching going on in the classroom. If you are interested in discussing a matter with your child’s teacher or need to take your child out of the classroom, please contact the teacher or the school office to make the necessary arrangements.

How can parents become more involved?

St. John the Baptist School welcomes and encourages the involvement of parents and caregivers. To learn more about the Home and School Association and adult Involvement, visit our Get Involved page.

* Beginning Sunday, September 5 the 7:30 am Mass will be discontinued.

At St. John the Baptist Church we offer two types of seating:

Open Seating: The majority of seating in the church room is open to every pew, with facial coverings optional.

Distanced Seating: The center section located to the right when entering the main church room (section four), is reserved for socially distanced seating. Seating in section four is open to every other pew and facial coverings are optional. Pews with a white sash are closed.

The Saturday 4:00 pm Mass is viewable live on YouTube.

If you prefer to view Mass at a different time, the recording will be available after the live stream has ended. We invite those viewing live-stream Mass to pray The Act of Spiritual Communion (located in the video description on YouTube). 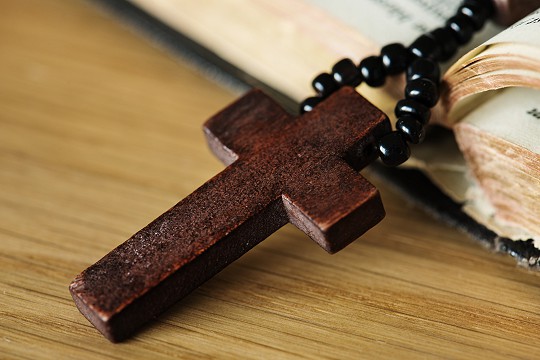 In addition to Sunday, the days to be observed as holy days of obligation are as follows:

January 1, the solemnity of Mary, Mother of God

Thursday of the Sixth Week of Easter, the solemnity of the Ascension

August 15, the solemnity of the Assumption of the Blessed Virgin Mary

November 1, the solemnity of All Saints

December 8, the solemnity of the Immaculate Conception

December 25, the solemnity of the Nativity of Our Lord Jesus Christ

SOLEMNITY OF MARY, MOTHER OF GOD

This feast, closely connected to the feast of Christmas, is the most important and oldest of the major feasts of Mary. Mary’s Divine Maternity became a universal feast in 1931. Liturgical reform initiated by Vatican II place it on January 1st in 1969. Prior to this, this feast celebrated on January 1st was the circumcision of Jesus. Although the obligation to attend when these three holy days fall on a Saturday or Monday is abolished, parishes are to continue to observe these Holy Days by scheduling one or more Masses at a convenient time so that people who wish to participate are able to do so.

This feast is celebrated on the fortieth day after Easter Sunday and commemorates the elevation of Jesus into heaven by his own power in the presence of his disciples. It is narrated in Mark 16:19, Luke 24:51, and in the first chapter of the Acts of the Apostles. In March 2000, the Catholic bishops of the Wisconsin province transferred the Feast of the Ascension to the seventh Sunday of Easter, one week before Pentecost Sunday. The Vatican, at the request of the bishops of the United States, granted permission for the date change, giving ecclesiastic provinces in the United States the authority to make the transfer. Observing the Ascension on the seventh Sunday of Easter allows for heightened celebration and an increased opportunity to educate people about the meaning of the feast.

ASSUMPTION OF THE BLESSED MOTHER

This is the principal feast of Mary. It has a double purpose: first, the happy departure of Mary from this life and second, the assumption of her body into heaven. Little for certain is known about the day, year and manner of Mary’s death. The dates assigned for it vary between three and fifteen years after Jesus’ Ascension.

This feast honors all the saints, known and unknown. It was first celebrated on May 13, 610, when Pope Boniface IV proclaimed the day Feast of All Holy Martyrs in Rome. The intent was to honor all martyrs who were not included in local records. In 835, Pope Gregory IV changed the date and name to November 1st and Feast of All Saints. A fall date allowed people to celebrate with food from the fall harvest.

This feast celebrates the birth of Jesus.

Please consult the bulletin or call us directly for Mass times. The U.S. bishops decided, with Vatican approval given July 4th, 1992, that when the Solemnities of Mary, the Mother of God, the Assumption or All Saints’ Day fall on a Saturday or Monday, it is not an obligation to attend Mass for these feasts.

If you have any questions about St. John the Baptist, our church, school, or how to get involved, please feel free to reach out to us! Fill out our form and we will be in touch with you soon! God Bless!